The blaze known as the Camp Fire was set as the most destructive wildfire in history. In November 2018, Camp Fire burned it’s way through Golden state, turning 153,336 acres of land to ashes and cost between 7.5- 10 billion dollars worth of damages. It was also recorded as the deadliest in the state and sixth all over US’ wildfire with almost 19,000 buildings and infrastructure consumed and 85 casualties.

Among all of the communities affected, the town of Paradise was the most damaged with 95% of the town’s buildings ravaged and all of its 27,000 residents evacuated from their homes. During the natural calamity, most locals had little to no time to escape better yet to save some of their belongings. While few had the luck of gathering some possessions, others lost more than material things.

As for Andrea Gaylord, watching her century old home turn into flames, nothing hurts as much as being separated with her two guard dogs, Madison and Miguel. As the fire spread throughout the area, the two dogs had taken off and vanished without a clue. Andrea and her husband tried their best to find their pets, but the need to flee became urgent as the scene was not safe anymore.

After 17 long days, the Camp Fire blaze was finally under control. Like most of her neighbors, Andrea and her husband’s first instinct was to return to their home, hoping their two dogs miraculously survived. 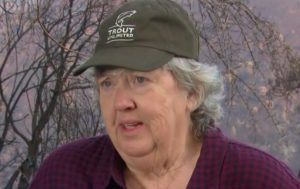 When they tried to leave the shelter, they were stopped and warned that the town was still unsafe to visit. That is when she reached out to Shayla Sullivan, a K9 Paw Print rescue.

Shayla was determined to find the two dogs, and after coordinating with some local shelters, she was surprised to see Miguel 85 miles south of Paradise, in Citrus Heights. She was happy but unsatisfied with one dog, so she headed to Paradise in search for Madison. In the rubble of their perished home, Madison was found luckily alive too. She then informed, Andrea and her husband and the family was reunited happily.

The idea of feeding your dog with raw foods may …

Dogs surely enjoy a nice walk outside especially if the …

Angelina Lubowa is a mother of two. She is a dog lover and would like to share her passion with her followers.

Our website is made possible by displaying online advertisements to our visitors. Please consider supporting us by disabling your ad blocker.